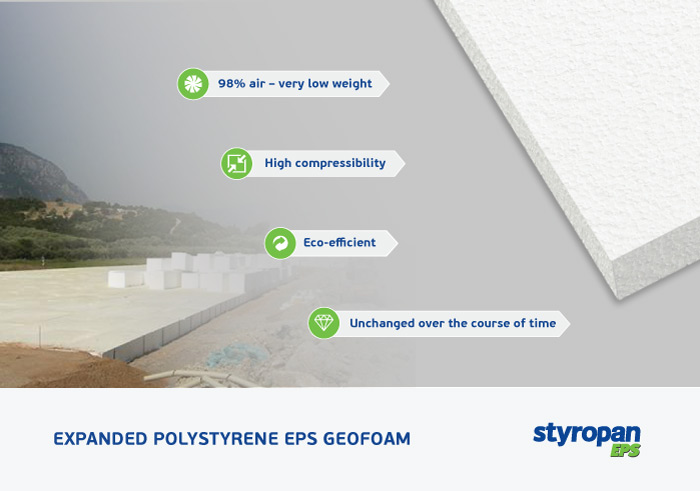 Its low weight and its particular mechanical behavior make EPS geofoam a reliable solution when constructing light weight embankments on soft and compressed ground. Geofoam weighs anywhere from 0.5% to 2.5% of conventional embankments’ weight and during its application, the natural ground amelioration works are minimized. In addition, subsidence issues are also minimized, and the project maintenance cost is reduced.

Light weight embankments can be divided into sub-categories: 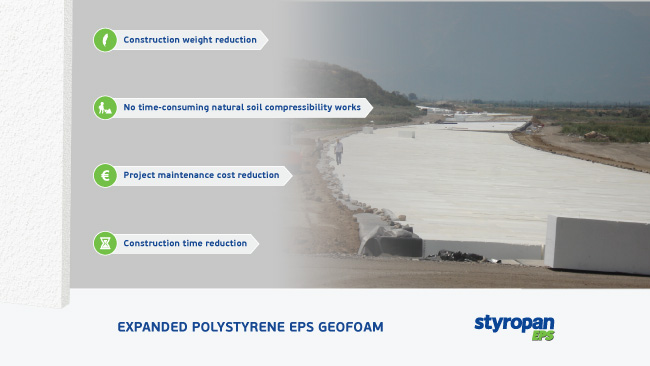 EPS replaces part or the whole embankment and it is installed interlocked with the existing embankment or other constructions. The material is covered in its circumference with insulating materials and embankment, so that it may be protected against petroleum products’ spillage, fire and elevation due to lift.

In Greece, the first application took place on the Α1 Motorway (Patras-Athens-Thessaloniki-Evzonoi) in the area of Malakasa and later to the same Motorway in the area of Skarfeia-Thermopyles. In both cases, the geotechnical conditions were extremely unfavorable, while during the initial conventional embankment construction, there was a large-scale failure (foundation subsidence up to 2.5 meters). By using geofoam, the subsidence stopped, and the construction time was dramatically reduced.

The use of geofoam in transitional embankments of bridges leads to weight reduction of the construction, minimal subsidence of the compressed subsoil layer while it provides the possibility of forming vertical slopes. A huge advantage of the geofoam use is the embankments’ static and dynamic (seismic) load reduction.

By using Geofoam EPS, we reduce the active sliding mass, we provide the vertical façade construction capacity and we increase the safety factor. At the same time, rapid reconstruction of roads in subsidence areas is made possible.

The constructing companies have customers in the Netherlands and abroad as well as hundreds of orders for homes that are partially on water, over a polystyrene (EPS) and concrete base that offers additional insulation capacity against low temperatures. A Dutch company  has built five floating islands for the government of Maldives in 2015. This project with a budget of 500 million dollars, included the creation of golf courts and a floating, star shaped convention center spanning over 610,000 m2.

Fields marked with * are required.

The site uses cookies for ease of browsing. By using it you automatically accept the use of cookies. Read more